We understand that the default font size on our website may not be suitable for everyone, depending on what device you are using, its screen size / resolution and zoom factor, so we give you this option to adjust the font from 8 point up to 18point. The current font size is pre-selected for you. Please be aware that a cookie will be set so that the website can remember your selection as you navigate through different pages. If you have cookies disabled then this setting will not be remembered.

Not all content on each page will be adjusted based on your selection. Some content will be a fixed size to ensure it displays correctly.

Technical Aspects of Macro Photography
This was initially an article I created for The Leica and Photography Club of Brisbane website, but as that club is closing down, I decided to re post the article here for anyone that may find it of benefit.
Originally Written in April 2007 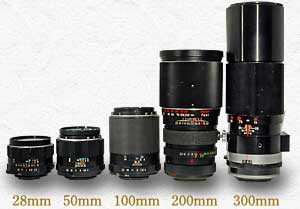 A discussion on the technical concepts that need to be considered when undertaking this style of photography. If you have an interest in macro photography, and like using a manual camera with no TTL flash control, then there are a few issues which you will first need to understand before you'll be satisfied (or yield consistency) with your photographs.

This article will also cover the issue of what focal length lens should you choose.

To start, I think it's worth mentioning that I'm no expert. As I photograph on slide film using a manual, mechanical Pentax Spotmatic SPII camera with no TTL flash control, knowing my exact exposure is critical, so the below information is what I've worked out to ensure I obtain the results I am after. Have a look at the Gallery Page under the Macro Category for examples.

With any macro photograph the largest issue is perceived to be Depth of Field, because you want as much as you can get, without sacrificing too much of something else, so how do you calculate Depth of field, and more importantly, what other aspects impact on how much (or how little) Depth of Field you end up with.

Apologies in advance for the length of this article. It is comprised of three Parts
PART 1: Lens Symmetry     |     PART 2: Effective Aperture     |     PART 3: Diffraction Limit

Now everyone considers Depth of Field to be as simple as what F-Stop you set your lens to (and / or what focal length you're using), but there are a few more issues which play a larger part, such as magnification and Pupil Magnification Factor (or lens (a)symmetry). So lets start with Lens Symmetry:

Part 1: Lens Symmetry. How it effects Depth of Field (DOF) 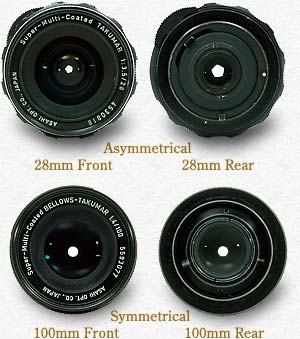 The great majority of depth of field calculators encountered in text books have a similar failing in common; that the issue of lens (a)symmetry is completely ignored. This is fine as long as an asymmetrical lens is not used at close focus or high magnification. So I'll now explain how lens (a)symmetry affects Depth of Field.

A measure for the lens symmetry is the Pupil Magnification Factor (called PMF or P), also known as the Pupil factor.

The entrance pupil is the lens aperture that is seen when you look into a lens from the front, the exit pupil is physically the same opening but observed from the rear. For a perfectly symmetrical lens the pupils have the same size and P=1. Departures from a symmetrical design occur, for instance, with the telephoto lens (P<1) and the retrofocus wideangle lens with P>1. Apart from the DOF, the pupil magnification affects quantities such as the depth of focus, the effective aperture (in relation to exposure) and the field of view. For faraway subjects the pupil magnification factor has no significant influence on these quantities, but becomes important for image magnifications. In the macro realm the impact of a non unitary P is substantial.

The picture on the left shows an asymmetrical 28mm Takumar lens, where the exit pupil is much larger than the entrance pupil. Compare that to the 100mm Takumar Bellows lens, and you can see the pupil exit and entrance are much more even.

For some real life examples, here's the PMF values for some of my Prime lenses :

So now we've covered PMF, lets first look at what impact it has on Depth of Field. But before we do that, I'll discuss how to Calculate Depth of Field, so I can then use actual values to show the difference between lenses of varying levels of (a)symmetry.

To calculate DOF the formula I use is as follows :

The variables from the above equation are:

So lets test it. Taking a photo at 3 times magnification (3:1) with lens aperture at F16, here's the data for each required variable mentioned above incase you wish to do the calculations at home :

So shooting at 3:1, the 300mm lens yields 285% MORE Depth of Field than the 28mm lens !
That sounds incredible, so why not use long focal length prime lenses all the time for macro work?.. Well that brings us to the next important issue which is effected by the Pupil Magnification Factor : 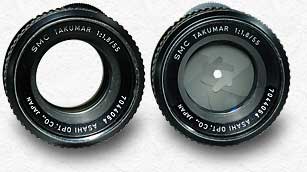 Does PMF effect aperture?.. Absolutely ! To see how this impacts on aperture, we need to calculate Effective Aperture. First up everyone knows what aperture is: Basically the f-stop setting of the lens determines how much light is let through, BUT effective aperture is how much light actually reaches the film plane.

Now when your lens is at infinity focus your lens aperture is equal to your effective aperture, but what most people don't realize is once you start to focus you are adding barrel extension (pushing the lens away from the film plane) and now there is some light lost due to that extra distance it must travel. Most of the time this is insignificant, but in the macro world this is massively important. Here are a few examples of lenses used normally (ie just camera and lens) to show you what impact minimum focus has on effective aperture and what variation occurs due to PMF.

So you can see that just using the lens normally at minimum focus has an impact on aperture, of course the photographer never realizes this because majority of people use the cameras built-in meter (TTL metering) and as these meters are reading the light received through the lens, the operator simply adjusts the shutter speed accordingly, to retain good exposure at F16, but consider if you were to use a hand meter ? You would be almost 1 and a 1/2 stops under exposed using that 100mm macro lens at minimum focus if you didn't take into account effective aperture! But I hear you ask, why does the aperture vary so much in those 5 lenses if they are all set to F16?. The reasons are:

So lets see how much variation there is using 3x magnification with lens aperture at F16 for those 5 different lenses. Now if you calculate the actual aperture, it should be F64 with a symmetrical lens (when using extension tubes) as you can see with the 50mm Takumar.

You can see there's approximately 3 f-stops of light lost between using that 28mm lens versus the 300mm lens at the same magnification and it's vitally important that this be taken into consideration when you use a manual camera and manual flash for macro photography.. Earlier I showed that the 300mm lens provided an increase in Depth of field (by almost 300%) compared to the 28mm lens, but now we can see that the trade off (price to pay) is 3 f-stops.

What you gain with Depth of Field for the 300mm lens you now lose with effective aperture and that is true with most photography, it's just more drastically demonstrated in macro between different lenses. However with the loss of additional light now with effective aperture, this brings us to the next issue :

Diffraction is an optical effect which can limit the total resolution of your photography. Ordinarily light travels in straight lines through uniform air, however it begins to disperse or "diffract" when squeezed through a small hole (such as your lens aperture). This effect is normally negligible, but increases for very small apertures. Since we're pursuing better sharpness, we use smaller apertures to achieve a greater depth of field, at some aperture the softening effects of diffraction offset any gain in sharpness due to better depth of field. When this occurs your camera optics are said to have become diffraction limited. Knowing this limit can help you to avoid any subsequent softening, and the unnecessarily long exposure time or high ISO speed required for such a small aperture.

But, here is where I run into a roadblock. With Macro have we reached the Diffraction Limit earlier or not? For film cameras the Diffraction limit is said to occur at apertures above F22. But what I can't find any information on is if I photograph at 3.5 times magnification and the lens aperture is set to F16, have I exceeded the Diffraction Limit because my actual effective aperture (taking into account the loss of light from using extension tubes and from PMF) is F79.5 (100mm Takumar). That is ~4 and 5/8ths stops of light lost, but more importantly that is 3 and 5/8ths stops over the recognized diffraction limit of F22!

In my opinion Diffraction occurs when light is passed through an opening that is too small and if two airy disks become any closer than half their width they are no longer resolvable (as defined in the Rayleigh criterion), and not simply by passing down an extension tube. So therefore in my humble opinion diffraction impacts on the quality of light, but extension tubes impact on the quantity of light reaching the film plane. So if I keep the Lens aperture to no smaller than F22 (to ensure the quality of light) I should not suffer the limitations of diffraction.

7) Photography
1) How To / Setup Questions / Topics

HOW TO Request a Quote from us.

HOW TO send an email with Attachment (Microsoft Outlook)

HOW TO Setup an Email account in Microsoft Outlook / Express

What are the different layout styles (fixed / floating / variable)

Where are your list of Templates to choose from?

Do you wish to transfer your Website to Us?

Can you explain the Maintenance Option?

I Don't Have a Domain Name. Can you Help?

I am not receiving any Emails. What is wrong?

Your Mailbox is Full, but my Inbox is Empty. Why?

How to place an Order?

You have ordered one of our Packages, but you've changed your mind.

How to Increase Magnification

How to Use this Section
To make it easier for you to locate any information you are looking for, all Questions and Answers are grouped into Categories. This keeps all similar questions grouped together.

First you select a category from the list on the left.

The list of questions available for that category will be displayed Here.

Click on any question to be shown the answer at the top of this page..

All Information, Specifications and Details
subject to change without notice.

Please contact us for a no obligation,
Free Quote which will be valid for 90 days